Rumor is the sweetest poodle in our pack. She can often be found in the arms of a family member. She loves to be chased by our other poodles and will tempt and tease them until they comply with her desires. She enjoys tossing her toys in the air and then catching them. We have often walked into a room to find her entertaining herself. In these moments she quickly shifts gears and her entire being sings out "Is it time for a cuddle?" She is a special girl who enthusiastically adores life while maintaining a sweet and stable temperament. Rumor came to us through Beth Harris. We are so grateful for this beautiful, brainy, sweetheart.

Rumor finished her show career with style before her first birthday, often going best of opposite sex to her famous father London, MBIS/MBISS/GRCH Jaset's Satisfaction. She moves with grace and confidence never putting a foot wrong. As suggested by her fantastic movement, she is a balanced poodle. She has a gorgeous head and very pretty feet. Rumor is icey white with consistent black pigment. She is a very nice poodle.

A highlight from her show career for us was watching her float around the ring at Poodle Club of America's national speciality show. There were 19 beautiful dogs in her class and when Rumor moved the crowd roared.  Rumor came in 2nd in her class, which is quite the honor at this show. The poodle that won 1st place in the class went on to become winners bitch (top female in all classes). We are so very grateful to Ann Rairigh for her professional handling and care while Rumor was earning her AKC championship title. 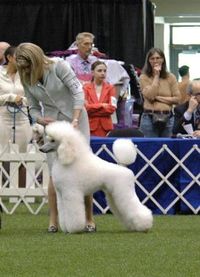 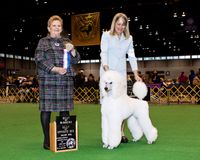 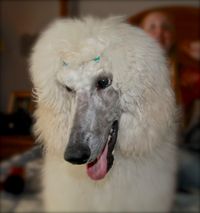 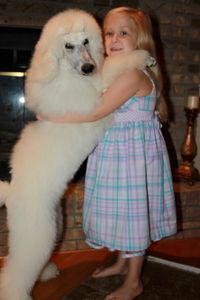 AM CH Rumor has it for Azel

Click on Rumor's picture and then on the arrows to view additional pictures of Rumor.